Earlier this month I was given a fantastic opportunity to appear on the Indie Author Panel at LFest. This is the UK’s biggest women-only festival, and has been running for a few years now. The Indie Author Panel showcased five authors whose work is primarily lesbian-focused, with each of us doing a couple of readings from a recent or upcoming work, and then taking a short Q&A session from the audience afterwards.

We were on at ten a.m., the morning after the opening night party. Hm, we thought, we’ll get about a dozen women in the audience if we’re lucky… Imagine our delight when around forty five women got themselves out of bed early and into the Arts Stage tent to hear us! It was a great experience, not least because I got to spend time in a Green Room for the first time in my life, mixing it up with other artists who were appearing that day. Cool. 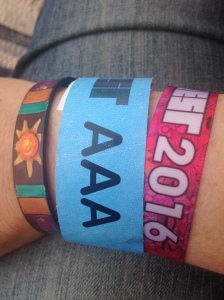 Once our panel and schmoozing in the Green Room was over, the rest of the festival was up for grabs. Music, comedy, drama, poetry, dancing – it’s all there. And it’s all centred around women – mainly those who identify as lesbian, but it’s nowhere near that limiting, and that was wonderful to see.

As I sat in the sunshine on the Sunday afternoon, on a patch of grass situated between the two main tents so that I could keep one ear on each, I looked around at the people I shared that field with. It had been a long time since I’d sat in a space that was so queer-centric. I’ve been lucky in my professional life these past few years that my sexual identity has been accepted by virtually everyone I work with. And, of course, society itself has made great strides to acceptance since I first came out in the early nineties.

Back then, my social venue of choice would always have been a gay or lesbian bar or cafe. I wanted to feel safe, surrounded by like-minded people. I didn’t want to risk exposure to verbal (or potentially worse) abuse by being openly gay in a non-gay environment. As times moved on, as I myself became more comfortable with being open about my sexuality, that need to be segregated in my social life diminished. I went to straight bars with friends or colleagues and didn’t bat an eyelid about being overtly lesbian in such a space. Every queer woman I knew did the same, felt the same way. Which is good, right?

Except, of course, then I began to hear stories of lesbian-only venues closing down. It seemed we’d been so successful at integrating, we didn’t need our queer spaces any more. Everybody loves us, so we can just blend in. Assimilate. But is there a danger in that? Do we lose identity if we are just one of the crowd?

I realised, sitting in that field in Uttoxeter (no, I didn’t have a clue where it was either), that actually, I think we do still need our queer spaces. Even if it’s only for three days in July. Being surrounded by women who, one way or another, all ‘got me’, gave me a sense of peace I haven’t felt in a long time. We all knew each other, even though we were strangers. We knew what it was like to be us – not the details of our lives, but the essence. Our experiences, however different they may have been at the micro level, were the actually the same. All of us had travelled a path that was different from the norm in order to truly know who we each are.

So, whilst I think it’s great that we can indeed access all areas in life these days, I will be making a point to hunt out queer spaces to visit and enjoy and share. I think they still serve an incredibly important purpose, and I don’t want to lose any more of them.