Well, it’s been a while since I blogged but we can blame illness and NaNo for that. I am now back in the saddle, so to speak, and just wanted to update you on all the latest happenings. 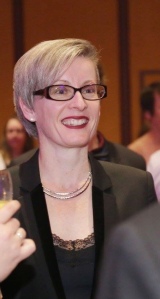 November saw me taking part in the DIVA Magazine inaugural Literary Festival, at the Hilton NEC in Birmingham, and what a great event it was! I was there with a whole gaggle of fellow Ylva authors and supporters, womanning a stall for the weekend where we not only sold a heap of books, but met lots of lovely readers and other authors from the UK and elsewhere. Highlight for me had to be meeting Harper Bliss in person, having been a big fan for a long time. I fangirled, I freely admit. 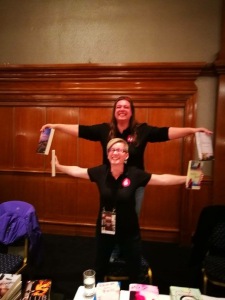 As you can see from the photo at left, Andrea Bramhall and I got a tad carried away having fun in one of the quieter moments during the weekend, re-enacting famous film scenes utilising only our own published works. As you do.

The DIVA event was marred only by me waking up with a horrendous chest infection on the second day which then had me off work for two weeks and feeling proper sorry for myself.

However, having pledged to do my first ever NaNoWriMo during November, like a brave little soldier I forced myself to sit down every day and do the requisite words. And, much to my surprise, I found the entire NaNo process to be way more to my liking than I might have imagined. Up to now I’ve been a plotter rather than a pantser, but the speed at which one needs to write during NaNo meant that I found myself winging it significantly more than I have done in the past, and really liking it. I found the words flowing easily, and the characters taking me on a journey with them rather than me forcing them down a particular pathway. And I finished the 50,000 words six days early on 24th November! I definitely had a big sense of achievement from that. 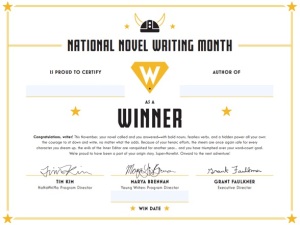 So that brings me to the exciting WIP updates! The novel I started during NaNo is my sixth, and it’s a celebrity romance based in Norfolk and London. It’s been fun to write, and I’m only about 15,000 words from the end before I send it off to my beta readers. Also on the go is my fifth novel, which is proposed to be part of the Ylva ‘Window Shopping’ series – it’s a fun, sexy tale set in London.

Now, it might sound a bit backward that I have two novels being written at the same time, but I’d actually finished the draft of number five before NaNo, then received a request for some rewrites from my publisher while I was in the throes of writing number six for NaNo. As I was on a roll I decided I had to keep going with the NaNo work and come back to the earlier novel a little later. Luckily, my publisher was very understanding about that! So, as soon as novel number six is written I’ll be back to rewriting elements of novel number five. And I think I know which two novels I want to write next year too, and now need to plan when to write them in amongst everything else I have planned for next year (more on that later).

Just because I like a challenge, I’m also working on another free short story for this website, a romantic, Christmas-themed one which I hope to post this weekend (9th/10th Dec). This one’s been written just for fun, it’s not related to any of my published works, and therefore I’m just going to throw it out there with no professional edit. Ignore any errors that appear as a result 🙂

And to finish, I’m delighted to have been awarded two Honourable Mentions for ‘Miles Apart’ in the Rainbow Book Awards. See here for details of all the HMs in all categories; final results announced on 8th December 2017.