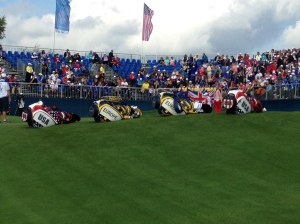 My latest novel, The Long Shot, is out now (see link below to buy!) and it’s a sporty one. Sports romance is not something I’ve written before, but I love to read the genre, having been a big sports fan my whole life.

My parents used to joke that I learned to kick a soccer ball before I could walk, and by the age of thirteen I was playing for a women’s team in one of the lower leagues that existed way back then (we’re talking around 1980, when women’s soccer had zero funding and zero coverage). My playing career was short but my love of the game, and many other sports, continued.

Flash forward to September 2015, when I treated myself to the all-inclusive package to see the Solheim Cup in Germany. This huge golf tournament takes place every two years, alternating locations each time between the USA and Europe. A team of the twelve best players from each continent battle it out over three days in three different formats of the game to win the coveted trophy. It’s without doubt my favourite golf tournament so I was beyond excited to get to see one live. And it totally lived up to my expectations, despite my team, Europe, being soundly beaten on the final day. I loved how close you could get to the action, to watch the players, and to soak up the incredible atmosphere. The photos on this post are some of mine from that awesome weekend. 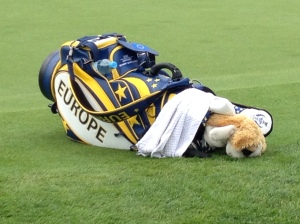 It was while I was there that I found my attention drawn to one of the European golfers. Suffice to say she was rather attractive, and set my gaydar pinging all over the place, even though to my knowledge she wasn’t publicly out. Before the end of the tournament the kernel of an idea for a novel had started to form in my mind. What if there was a high-ranking golfer on the women’s tour who was a brilliant player but somehow never seemed to win the top tournaments, and she was lesbian but kept it on the down low, and then she met a woman and….?

I had plenty of other novel ideas already sketched out, so I put that one on the back burner for a while. And last year it started waving at me from the list of ideas, itching to get my attention. So I sat down and started researching the women’s game a little more and suddenly I was writing my sports romance. It was great fun to write, and to bring my love of sport to the pages, but I was keen to make sure it would also appeal to non-sports fans as a pure romance. I’m pleased to say that, from the reviews so far, I’ve pitched that balance just right – I’ve seen many people commenting along the lines of “I don’t like sport/golf but I love this book” and that makes me very happy.

Oh, and a final twist to the story – the golfer I mentioned above did come out publicly while I was writing the book. So at least I also knew my gaydar was working, haha!

By the way, the next Solheim Cup takes place very soon, 9th-15th Sept 2019. It’s at Gleneagles in Scotland and all I can say is, Come on Europe! 🇪🇺

Buy your e-book of The Long Shot here 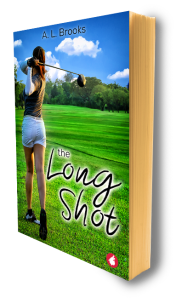 One thought on “Inspiration for The Long Shot”